Secretary General of the Organization of Islamic Cooperation (OIC) 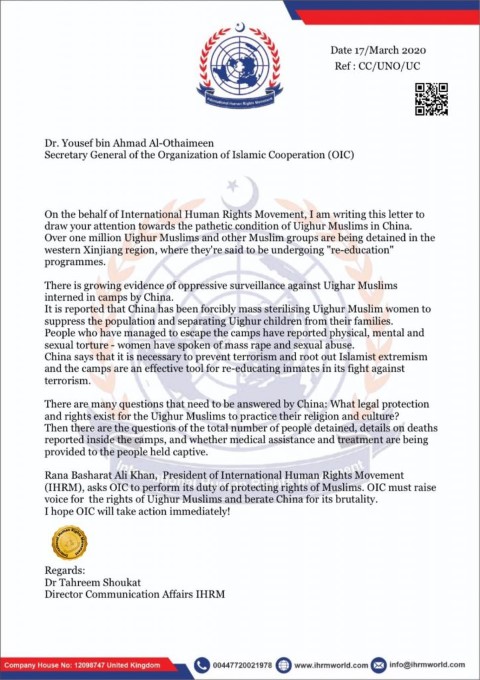 Secretary General of the Organization of Islamic Cooperation (OIC)

On the behalf of International Human Rights Movement, I am writing this letter to draw your attention towards the pathetic condition of Uighur Muslims in China. Over one million Uighur Muslims and other Muslim groups are being detained in the western Xinjiang region, where they’re said to be undergoing “re-education”  Programmers.

There is growing evidence of oppressive surveillance against Uighar Muslims interned in camps by China.         It is reported that China has been forcibly mass sterilising Uighur Muslim women to suppress the population and separating Uighur children from their families. People who have managed to escape the camps have reported physical, mental and sexual torture – women have spoken of mass rape and sexual abuse.

China says that it is necessary to prevent terrorism and root out Islamist extremism and the camps are an effective tool for re-educating inmates in its fight against terrorism. There are many questions that need to be answered by China: What legal protection and rights exist for the Uighur Muslims to practice their religion and culture?

Then there are the questions of the total number of people detained, details on deaths reported inside the camps, and whether medical assistance and treatment are being provided to the people held captive.

Rana Basharat Ali Khan,  President of International Human Rights Movement (IHRM), asks OIC to perform its duty of protecting rights of Muslims. OIC must raise voice for  the rights of Uighur Muslims and berate China for its brutality.