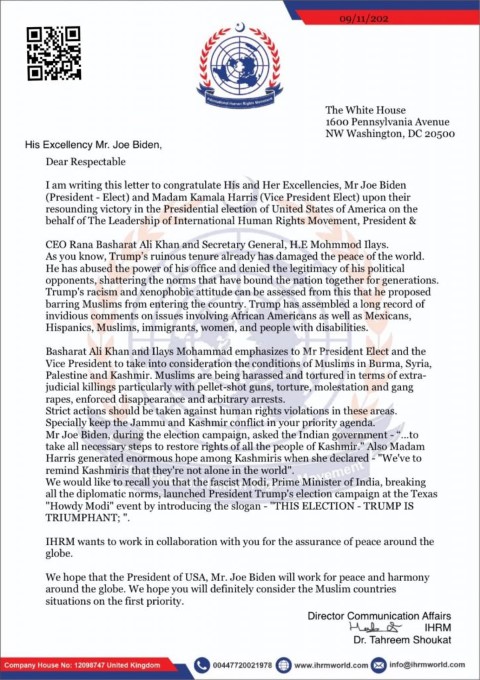 The White House
1600 Pennsylvania Avenue NW
Washington, DC 20500
Dear respectable
I am writing this letter to congratulate His and Her Excellencies, Mr Joe Biden (President – Elect) and Madam Kamala Harris (Vice President Elect) upon their resounding victory in the Presidential election of United States of America on the behalf of The Leadership of International Human Rights Movement, President & CEO Rana Basharat Ali Khan and Secretary General, H.E Mohmmod Ilays.
As you know, Trump’s ruinous tenure already has damaged the peace of the world. He has abused the power of his office and denied the legitimacy of his political opponents, shattering the norms that have bound the nation together for generations. Trump’s racism and xenophobic attitude can be assessed from this that he proposed barring Muslims from entering the country. Trump has assembled a long record of invidious comments on issues involving African Americans as well as Mexicans, Hispanics, Muslims, immigrants, women, and people with disabilities.
Basharat Ali Khan and Ilays Mohammad emphasizes to Mr President Elect and the Vice President to take into consideration the conditions of Muslims in Burma, Syria, Palestine and Kashmir. Muslims are being harassed and tortured in terms of extra- judicial killings particularly with pellet-shot guns, torture, molestation and gang rapes, enforced disappearance and arbitrary arrests.
Strict actions should be taken against human rights violations in these areas.
Specially keep the Jammu and Kashmir conflict in your priority agenda.
Mr Joe Biden, during the election campaign, asked the Indian government – “…to take all necessary steps to restore rights of all the people of Kashmir.” Also Madam Harris generated enormous hope among Kashmiris when she declared – “We’ve to remind Kashmiris that they’re not alone in the world”.
We would like to recall you that the fascist Modi, Prime Minister of India, breaking all the diplomatic norms, launched President Trump’s election campaign at the Texas “Howdy Modi” event by introducing the slogan – “THIS ELECTION – TRUMP IS TRIUMPHANT; “.
IHRM wants to work in collaboration with you for the assurance of peace around the globe.
We hope that the President of USA, Mr. Joe Biden will work for peace and harmony around the globe. We hope you will definitely consider the Muslim countries situations on the first priority.