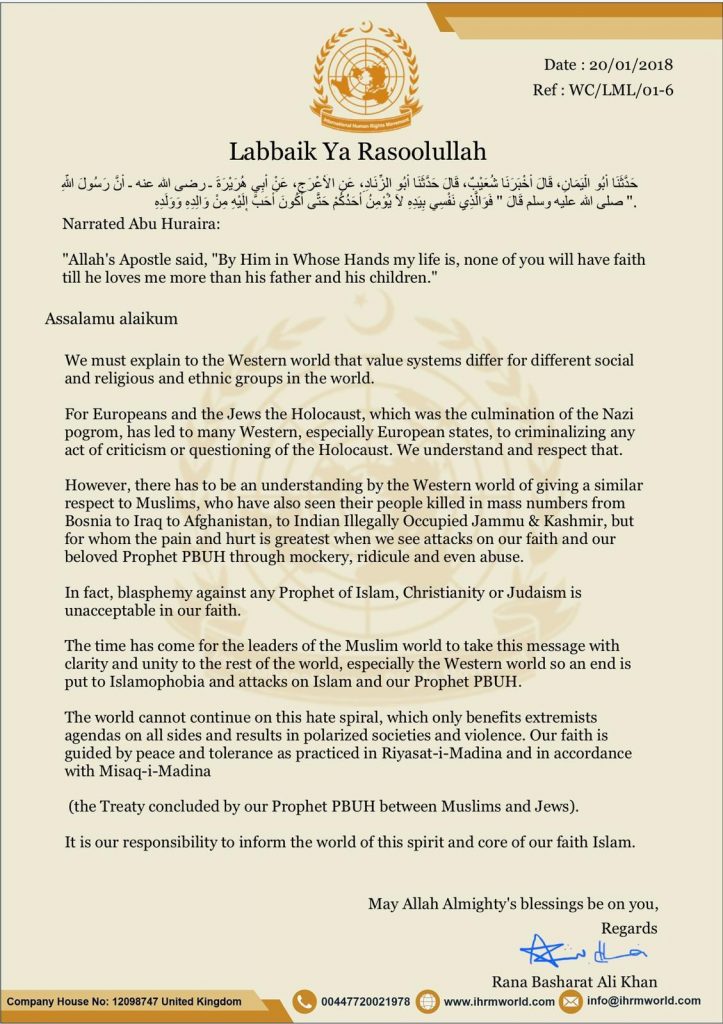 “Allah’s Apostle said, “By Him in Whose Hands my life is, none of you will have faith till he loves me more than his father and his children.”

We must explain to the Western world that value systems differ for different social and religious and ethnic groups in the world.
For Europeans and the Jews the Holocaust, which was the culmination of the Nazi pogrom, has led to many Western, especially European states, to criminalizing any act of criticism or questioning of the Holocaust. We understand and respect that. However, there has to be an understanding by the Western world of giving a similar respect to Muslims, who have also seen their people killed in mass numbers from Bosnia to Iraq to Afghanistan, to Indian Illegally Occupied Jammu & Kashmir, but for whom the pain and hurt is greatest when we see attacks on our faith and our beloved Prophet PBUH through mockery, ridicule and even abuse. In fact, blasphemy against any Prophet of Islam, Christianity or Judaism is unacceptable in our faith. The time has come for the leaders of the Muslim world to take this message with clarity and unity to the rest of the world, especially the Western world so an end is put to Islamophobia and attacks on Islam and our Prophet PBUH. The world cannot continue on this hate spiral, which only benefits extremists agendas on all sides and results in polarized societies and violence. Our faith is guided by peace and tolerance as practiced in Riyasat-i-Madina and in accordance with Misaq-i-Madina (the Treaty concluded by our Prophet PBUH between Muslims and Jews). It is our responsibility to inform the world of this spirit and core of our faith Islam.

May Allah Almighty’s blessings be on you,